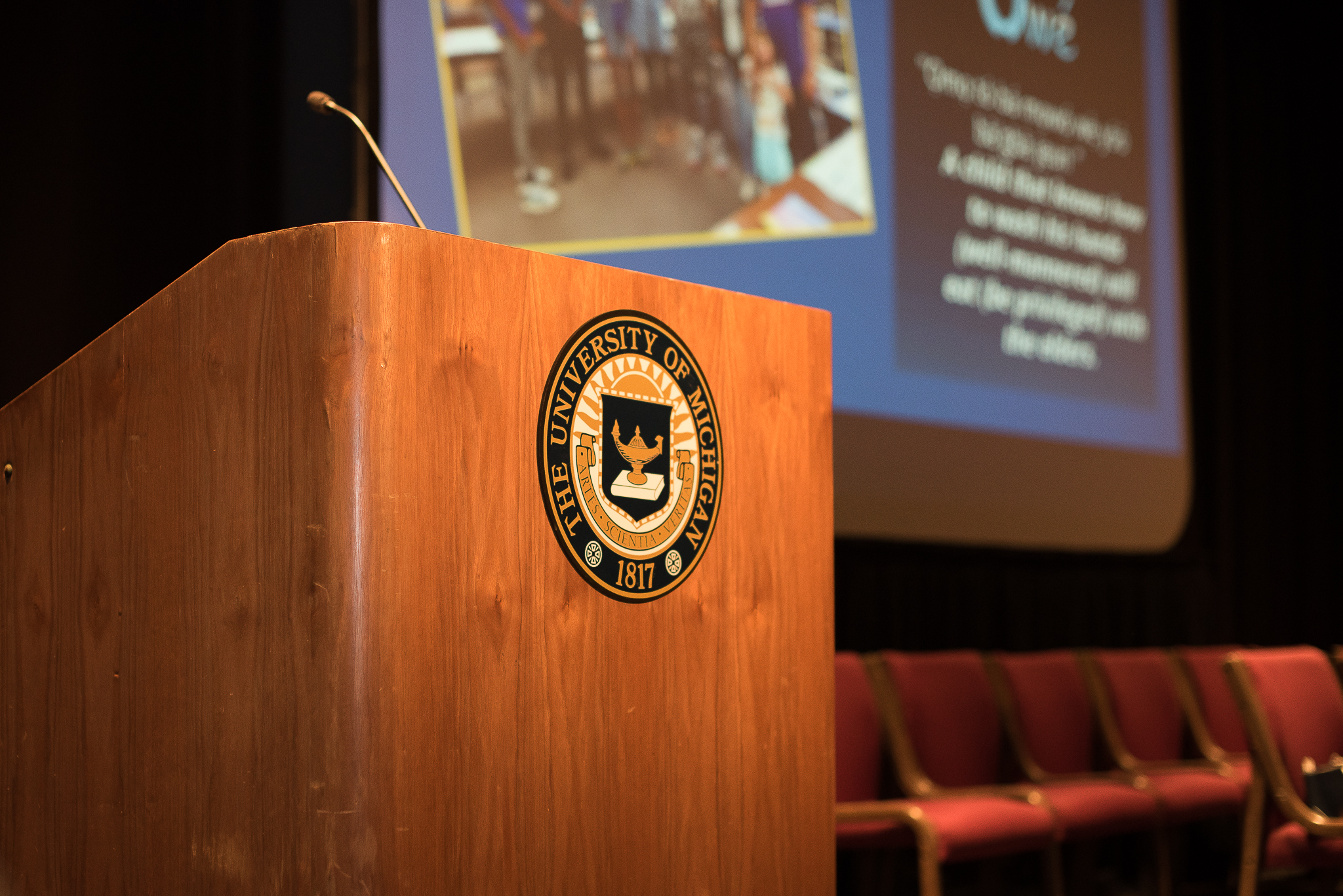 The promise of a full, four-year tuition scholarship to the University of Michigan is certainly an enticing offer. When the college preparatory program Wolverine Pathways (WP) launched for high school students in the Southfield and Ypsilanti public school districts in 2016, students jumped at the opportunity to participate in the rigorous program, which included Saturday and summer commitments, with no guarantee that they would become U-M students following the completion of the program.

“I heard ‘University of Michigan’ and ‘full scholarship,’ so it got my attention,” said Jessica Doernte, who recalls receiving a WP informational brochure at Washtenaw International High School. “Coming from a lower socioeconomic background, finding a way to pay for college has always been a priority [that was] drilled into my mind from when I was really young.”

“I heard ‘University of Michigan’ and ‘full scholarship,’ so it got my attention.” —Jessica Doernte

This spring, the class of 2022 will represent the first cohort of Wolverine Pathways students graduating from the University of Michigan. Members from this class have reflected on how the program has shaped their undergraduate experience, and ultimately, the trajectory of their young adult lives.

“It significantly changed my high school time. We were signing away two months of our summer [for] two more months of school,” recalls Bushra Habbas-Nimer, who attended Washtenaw Technical Middle College, a public charter school on the Washtenaw Community College campus.

In addition to the summer commitment, students also gave up almost every Saturday throughout the school year to be part of the program.

Habbas-Nimer, the child of Jordanian and Palestinian immigrants, described that for her and her siblings, “growing up, we didn’t have someone who understood the [American] education system, and going through it the way we would.” She recalls the struggles of her older siblings as they navigated through the transition to higher education.

“I was the first [person] in my family to be accepted into the University of Michigan—to go to college right after high school and finish in four years. That was only possible with the support I got from Wolverine Pathways.”

“I was the first [person] in my family to be accepted into the University of Michigan—to go to college right after high school and finish in four years. That was only possible with the support I got from Wolverine Pathways.” —Bushra Habbas-Nimer

The college admissions process can be a burdensome, bureaucratic process that stymies many qualified candidates. For those who have the resources from their high schools or families, navigating the difficult tests, essays and letters of recommendation can provide students with some much-needed guidance. The process can be overwhelming for those who lack this support or don’t have family members who have gone through the experience themselves. That is where Wolverine Pathways has stepped in.

The program was launched as one part of a multifaceted approach to help diversify U-M’s undergraduate student body. When the program launched in 2016, students were recruited from Southfield Public Schools and Ypsilanti Community school districts for a year-round immersive experience. The program now accepts students beginning in 7th grade and has since expanded to include Detroit and Grand Rapids. This first cohort began during their sophomore year of high school, taking practice SAT tests, learning how to write college entrance essays, and earning internships—all while juggling their already busy high school calendars.

Wolverine Pathways alumnus Emmanuel Tettey moved to Southfield, Michigan from Ghana in August 2013 when he was just 13-years-old. Attending a good college and the opportunities that would afford him were a motivating factor in his move to the United States. However, his father worked long hours as a truck driver, leaving Tettey to navigate the American school system primarily on his own.

When Tetty received pamphlets about Wolverine Pathways as a high school student at University High School Academy in Lathrup Village, Michigan, he remembers that “the choice to join the program came down to me—I filled out the forms.” Getting to the program site on Saturdays was also a challenge he took upon himself, first learning how to navigate the public bus system and then getting his driver’s license. “It was a lot. I didn’t expect it to be a lot, but I managed to work in high school and also the program. It was scary because I bet a lot on that program.”

While some students grew up in cities near the University of Michigan and were very familiar with its prestigious history as a public institution, Tettey notes that he “didn’t realize how famous the University of Michigan was until my junior year.” His family’s emphasis on receiving a good education—which stemmed back to his youth in Ghana—provided Tettey with guidance even as he navigated the large university.

“When I stepped foot on the University during our many visits, I could see why this program was necessary.”

“When I stepped foot on the University during our many visits, I could see why this program was necessary.” —Emmanuel Tettey

In addition to weekend lessons with Wolverine Pathways, which Habbas-Nimer noted sometimes conflicted with other extracurricular activities and sports competitions, the summer program was particularly impactful for many of these students.

Sydney M. Williams, a student at University High School Academy in Southfield, who is graduating from the Ross School of Business, described how spending time in the dorms and on-campus “set a lot of things in perspective for me.”

Williams described attending sessions with the admissions department, which helped walk the WP students through the school’s process. Additionally, the time spent on the U-M campus during their high school summers helped these young students envision themselves as college students, connecting them with faculty and student resources who helped solidify that they belonged there. 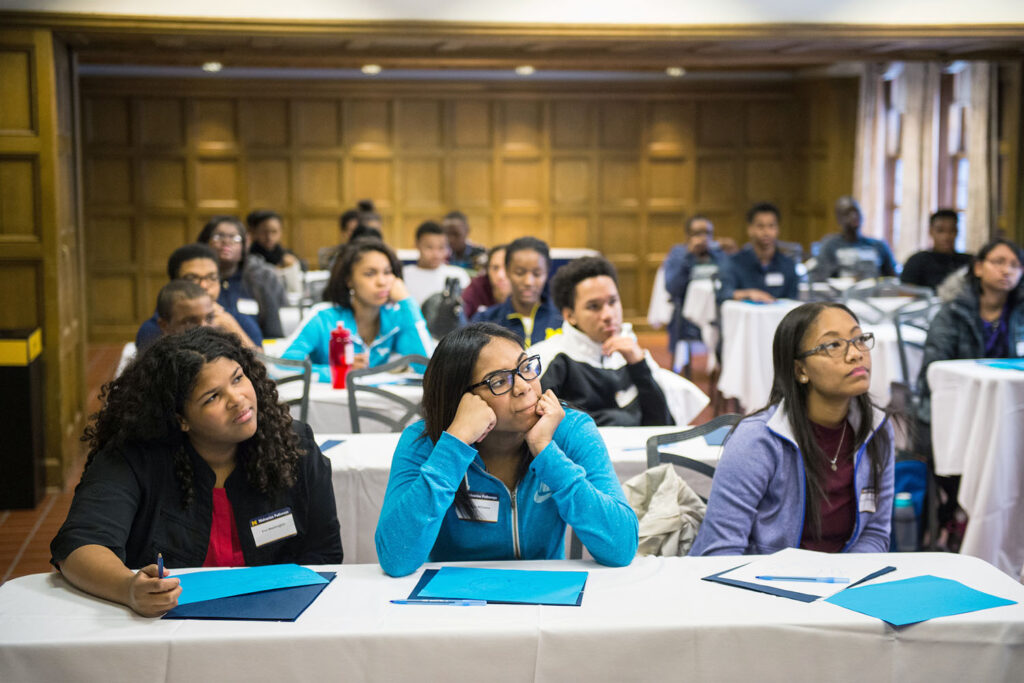 Wolverine Pathways participants enter the general applicant pool for admissions to U-M, competing against students from across the state, nation and world for admittance to one of the premier institutions in the United States.

It is a testament to the program’s focus on college prep that many of the students find success at U-M. Over 50-percent of WP students have been admitted to U-M Ann Arbor, more than double the overall admissions rate for the Ann Arbor campus. Additionally, many other graduates have received scholarships to other prestigious universities.

“We support [students] in the scholarship process writ large to help [them] make the most informed decisions for themselves,” says WP assistant director Dr. CaVar Reid.

The preparation that makes WP students competitive for admission to U-M makes them highly coveted by other schools as well. In addition to U-M, WP students have received scholarships to an array of institutions, including those in the Ivy League and colleges across the state. To date, approximately 1,000 students have gone through the Wolverine Pathways program, with an estimated 99-percent going straight to college following their high school graduation.

“If you’re dedicated enough to commit to WP, you’re the kind of student who will make things happen,” said Habbas-Nimer. “You’re a do-er, and when you’re a Pathways student, you get to do. You have more resources, so you’re not trying to figure out all of these foundational questions. You’re presented with a foundation, and you get to do and improve what you do.”

But it’s the promise of a full-tuition scholarship to U-M that sets Wolverine Pathways apart. “The burden of having college paid for, being lifted, you can’t even describe,” said Doernte, who will be interning this summer with Agilent Technologies. “When I think about when I end up making a salary, I won’t have to think about the looming issue of this huge pile of debt. It really is a blessing to not have to worry the way a lot of my friends will.”

Resources for the Future 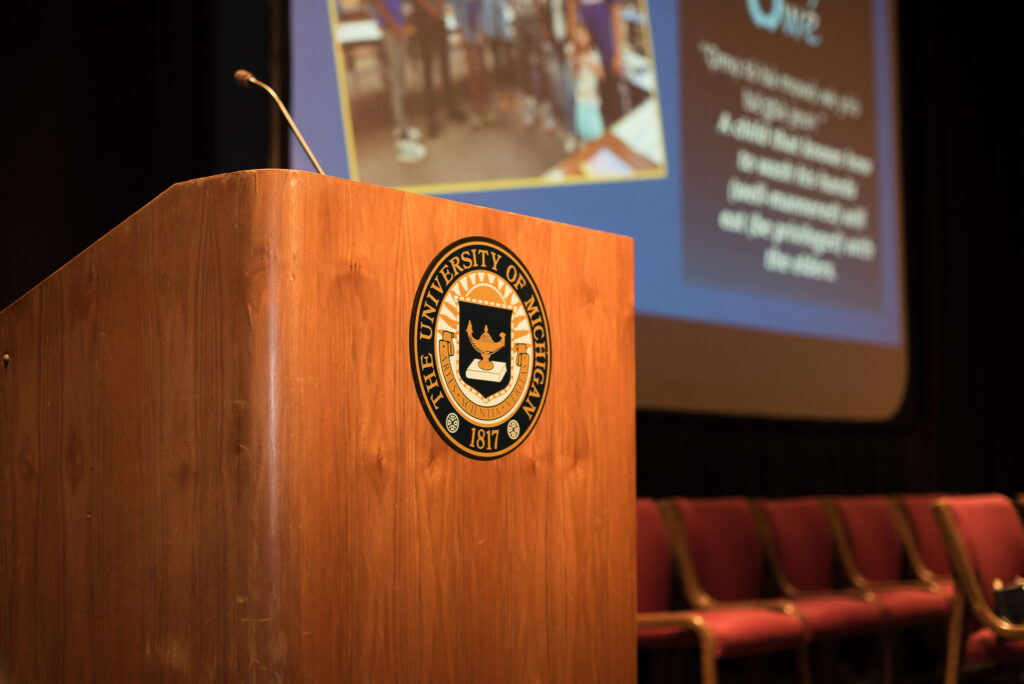 While their official commitment to Wolverine Pathways concludes once students begin their undergraduate degrees, the program strives to be a continual resource for internships, mentorship and job prospects.

This mentorship is a critical component of the program, both in high school and college. During one high school session, Doernte said that U-M mathematics Professor Stephen DeBacker demonstrated a “mathematical magic trick.” She said that she “took a very strong interest in how it worked,” and continued speaking with the professor after class and at lunch. “I’ll never forget this. The way he talked to me about the problem was, ‘you’re really good at this. You could do this more often.’ It’s a very small phrase, but that jump-started my passion and drive towards furthering my education and upper education.”

After her first calculus class, Doernte decided that math wasn’t her passion, but the Cognitive Science major said that “even to this day, I still reach out to [Dr. DeBacker]. I consider him my mentor and really good friend. If I wasn’t there on the day he decided to come in and teach us about that magic trick, I don’t know where I’d be right now.”

Tettey himself became a mentor to younger Pathways students by working as a Path Leader. This connection between U-M and high school students is an integral component of the Wolverine Pathways program and is a highly coveted position. Tettey remembers how impactful his own mentors were, “and now I was someone who people could come to get a perspective from. It was a beautiful experience trying to impart knowledge into the next generation.”

As a high school student, Habbas-Nimer thought she’d go into medicine. Thanks to an internship the summer between her junior and senior year of high school at the University of Michigan hospital, she spent a summer shadowing surgeons and doctors, as well as observing administrative staff. During her senior year, she interned with the University of Michigan School of Public Health, where she helped plan a summit for high school students that still exists to this day. “To take something that I created in high school with Pathways, and now it’s a sustainable program that’s staying alive even after I graduate is a really powerful experience,” said Habbas-Nimer.

These connections with the medical and health systems helped guide Habbas-Nimer’s time as an Organizational Studies major. “A lot of my coursework is dedicated to understanding institutional disparities and ways to advocate for these issues.” She parlayed that interest into an internship with consulting firm Accenture, with which WP connected, and accepted a full-time position with them post-graduation.

Habbas-Nimer says that many of her fellow Pathways colleagues have similar plans.

“I feel like a lot of the students in Pathways are very socially aware of things, and it’s no surprise that a lot of them have drifted their way to cultural organizations or some type of mentoring and social change organizations.”

O’Shai Robinson, the database administrator who has worked with WP since its inception, sees that as a goal. “One thing we’ve tried to show the first class in particular, is to instill in them and give them the resources to pursue their passions and somehow impact the world positively…hopefully with the resources we’re giving them, the tuition scholarship, the access to different people and resources, they can leverage that to impact their communities and the world.”

Now, with graduation right around the corner, the nearly 50 U-M students from WP’s inaugural class are witnessing the amazing benefits of the program they embarked on more than six years ago.

“The fact that they are pioneers—they didn’t know what the program was and opted into it, it’s now paying off. Six years ago, they didn’t know anything about Michigan, and now they’re leaving with Michigan degrees, job prospects,” notes Dr. Reid.

“The fact that they are pioneers – they didn’t know what the program was and opted into it, it’s now paying off. ” —Dr. CaVar Reid