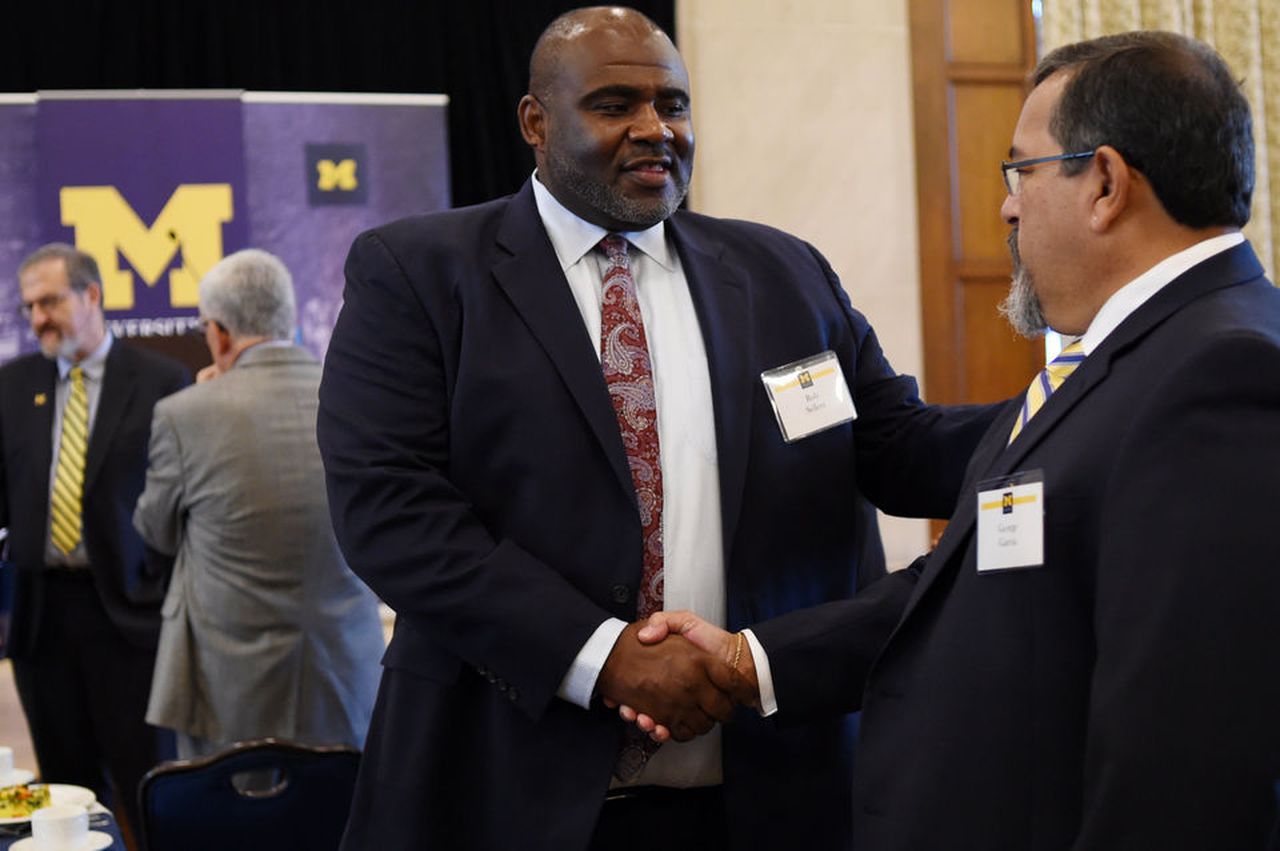 ANN ARBOR, MI –  The University of Michigan has completed year two of its five-year diversity, equity and inclusion strategic plan and is sharing its progress on key initiatives in the plan.

On Monday, Oct. 8, UM kicked off a week-long DEI summit with remarks from President Mark Schlissel and Chief Diversity Officer Robert Sellers, who provided updates on how the university continues to implement its plan.

UM unveiled the strategic plan in October 2016, announcing an  $85 million investment in new resources designed to help transform the campus culture. The campus-wide plan serves as an umbrella over 51 unit plans, including all 19 UM schools and colleges, administrative units, student life, athletics and the health system.

Progress has been noticeable on multiple fronts as UM heads into year three, Sellers said.

Of the nearly 2,200 strategic plan initiative action items, 92 percent have been implemented or are in progress.

“One of the things I can tell you from the bottom of my heart is that we still have a long way to go,” Sellers said Monday. “But I can also tell you we have also made a great deal of progress in the past three years. We are not the same institution that we were when we started. We are a more diverse, equitable and inclusive community and we will continue to work to become even more so.”

Here is a look at how UM is making progress in some of its most notable initiatives from the DEI plan. You can check out the entire progress report on UM’s website.

1. Trotter Multicultural Center expected to be completed in February 2019

After breaking ground on the new $10-million, 20,000-square-foot William Monroe Trotter Multicultural Center in November 2017, significant progress has been made on the facility.

Located in the heart of the university’s Central Campus on State Street, near the Kelsey Museum of Archeology, Betsey Barbour House and Helen H. Newberry Residence, the multicultural center entered its final phase in year two of UM’s DEI efforts.

UM President Mark Schlissel said construction on the center is on schedule to be completed in February 2019, with an opening event in April 2019.

The new center will replace the current center of the same name, with an added multipurpose room able to accommodate 300 people for banquets or conferences, and an alternative active-learning, classroom-style configuration for 130 students.

UM’s Wolverine Pathways program saw its first class of 88 students graduate during the summer. Of the 88 scholars, 80 – 91 percent – are attending a four-year college or university.

Of these, 45 currently are enrolled on the Ann Arbor campus and 15 are at UM Dearborn.

The university is attempting to bridge the gap of accessibility with students in communities like Ypsilanti, Southfield and Detroit with the Wolverine Pathways program, which began in 2015 as a free supplemental educational program focusing on project-based learning, intensive curriculum courses and pre-SAT preparation.

Now in its third year, Wolverine Pathways has expanded its offerings of annual cohorts of seventh and 10th graders in Ypsilanti and Southfield to the Detroit community, offering a full four-year scholarship to UM to students who actively participate in 90 percent or more of program activities and maintain a 90 percent or better school attendance rate. They also must maintain good school conduct and a “B” average or better in core academic courses.

In the second year of the HAIL Scholars Program, UM enrolled a total of 262 new students (221 first-year-students and 41 transfer students from UM-Dearborn) from 47 Michigan counties.

Launched in January 2018, the Go Blue Guarantee program makes college affordable for Michigan families with incomes of $65,000 or less and assets below $50,000 by providing financial aid packages totaling, at a minimum, the cost of tuition and mandatory university fees.

In the Winter 2018 term, 1,687 students received over $11 million in institutional support.  Based on fall enrollment numbers, that means around 7 percent of current in-state students on the Ann Arbor campus are now receiving four years of free tuition under the guarantee.

After the Go Blue Guarantee passed in June 2017, UM’s Office of Financial Aid went back into the university’s current enrollment and applied the basic rules of the free tuition intiative to determine which in-state students would qualify.

Many of those students already qualified for some form of aid prior to the Go Blue Guarantee, and a good number of them still could qualify for additional aid that goes beyond covering the cost of tuition.

Figures on the first incoming class of Go Blue Guarantee recipients are expected to be released with UM’s enrollment report toward the end of the month.

In the second year of implementing its DEI strategic plan, UM took steps to increase fundraising activity for initiatives that totaled approximately $11.8 million during the 2018 fiscal year.

Since August 2017, lead DEI fundraiser Kelley Stokes and her colleagues on the Office of University Development major gifts team helped secure outright and deferred commitments of $1.8 million for DEI programs, including scholarships for first-generation students.

In addition, UM’s Office of University Development is working with chief development officers in every school, college and unit to identify their top-tier DEI fundraising priorities and ascertain which of the university’s active gift funds relate to DEI.